Thanks to your support, Ducks Unlimited has reached another important milestone in its mission to fill the skies with waterfowl 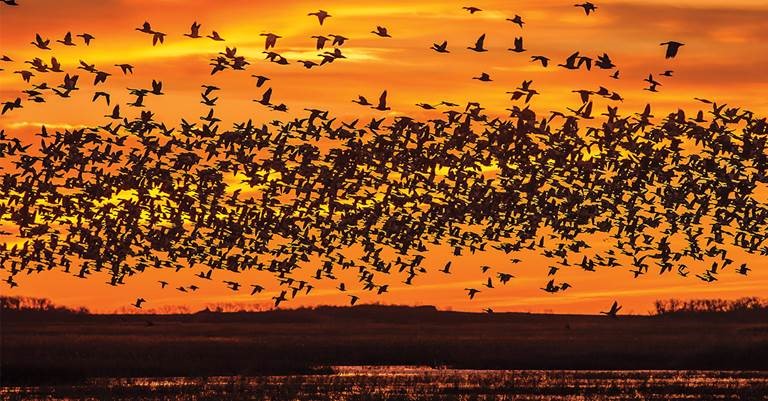 Waterfowl hunters have a long, proud history of supporting wetlands and waterfowl conservation. In 1930, a small group of duck hunters led by insurance and publishing magnate Joseph Palmer Knapp turned their passion for waterfowl and their habitats into action by forming the More Game Birds in America Foundation. Alarmed by declining duck populations, the foundation lobbied intensively for a cent-a-shell tax on shotgun ammunition to establish a permanent source of revenue for conservation. This effort, which was broadly supported by waterfowl hunters, culminated in the passage of the Migratory Bird Hunting Stamp Act (Duck Stamp Act) in 1934.

A year later, More Game Birds launched the inaugural International Wild Duck Census, covering most of Canada and the north-central United States. Results from this groundbreaking survey led the foundation to conclude that unless prompt action was taken to preserve the Canadian breeding grounds, the future of waterfowl and waterfowl hunting would be in jeopardy. In response to this threat, Knapp and his colleagues formed Ducks Unlimited, which was incorporated in Washington, DC, on January 29, 1937.

DU’s founders formed volunteer committees in each state and went to work raising funds to send to Canada, where a staff of biologists and engineers began restoring and protecting large permanent wetlands called “duck factories.” This marked the beginning of a new era in which sportsmen and women, who were the primary beneficiaries of waterfowl abundance, would voluntarily give back to the resource through their own conservation organization. Over the next few decades, DU made steady progress conserving waterfowl breeding habitat across the prairie provinces of Canada. DU’s conservation impact expanded dramatically during the 1960s and 1970s, supported by the spectacular growth of its volunteer-driven grassroots event system. Dollars from fundraising dinners and other events allowed DU to expand its conservation work into Mexico in 1974 and into the United States in 1984. 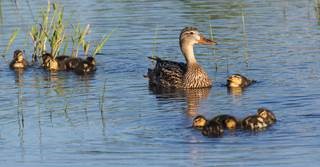 DU’s first projects focused on restoring and protecting wetlands in Canada for the benefit of breeding ducks. / Photo © Ken Archer

During the 1980s, severe drought once again gripped the prairies of the United States and Canada, and waterfowl populations plummeted. Habitat loss continued at an alarming rate, and without bold and immediate action, many in the waterfowl community feared that duck populations would never recover to healthy levels. As these concerns grew, a consortium of private conservation organizations including DU, state and federal agencies, universities, and other partners came together to draft the North American Waterfowl Management Plan (NAWMP), which would serve as a blueprint for the long-term recovery of waterfowl populations. A centerpiece of the plan was a “strategy for cooperation,” emphasizing the importance of partnerships that would conserve key habitats, improve scientific understanding, and periodically evaluate and update the plan.

Given the complex problems facing wetlands and waterfowl, DU and its partners concluded that the most effective way to secure the future of waterfowl populations would be to improve land use practices on a landscape level. To impact habitat on such a large scale, a dramatic increase in conservation funding was required. Those much-needed funds would come from the North American Wetlands Conservation Act (NAWCA), which was passed by Congress and signed into law by President George H.W. Bush in 1989. 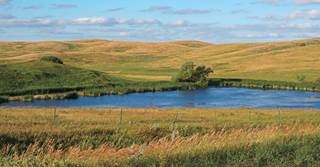 To encourage collaboration among partners, NAWCA requires each federal dollar to be matched with at least one nonfederal dollar. Thanks to this approach, NAWCA grants totaling more than $1.83 billion have leveraged $3.75 billion in matching funds from thousands of partners across North America. DU’s affiliates in the United States, Canada, and Mexico as well as its land trust, Wetlands America Trust, have been strong partners of NAWCA since its inception.

Thirty-five years after NAWMP was signed, support for wetlands and waterfowl conservation remains strong among hunters and a growing number of wildlife watchers and other outdoor enthusiasts. DU has also continued to grow and expand its conservation delivery. During the past fiscal year, DU boasted a membership of almost 700,000 people, raised over $230 million, and impacted a record 600,000 acres of waterfowl habitat across the United States. Over the past 84 years, DU has raised more than $5.2 billion for conservation. And this spring the organization surpassed an impressive milestone—the conservation of 15 million acres of wetlands and associated uplands across North America. The habitat conserved by DU and its partners is clearly making a difference for waterfowl and other wetland wildlife. A recent study published in Science reported that waterfowl were among the few groups of birds that have shown an increasing trend since 1970, a testament to the effectiveness of the NAWMP model and DU’s conservation work. 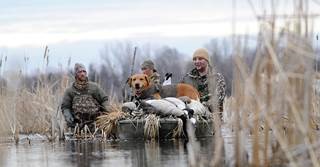 While the generous support of waterfowl hunters has established a solid foundation of habitat for the future, exemplified by those 15 million acres, filling the skies with waterfowl for generations to come will require DU to scale-up its efforts and continually revisit the original charge of NAWMP to leverage the power of partnerships. For example, scientists estimate that an additional 3 million acres of wetlands and 20 million acres of upland nesting cover must be secured across the US and Canadian prairies to allow breeding populations to continue to meet or exceed 40 million ducks during wet years, which is the NAWMP goal. Daunting challenges also exist on key migration and wintering areas. Along the western Gulf Coast, which supports peak numbers of more than 7 million wintering ducks, the region’s fragile wetlands are literally vanishing before our eyes. In south Louisiana alone, the forces of erosion, subsidence, and sea-level rise claim an area of wetlands equivalent to the size of a football field every hour. Without massive and strategic intervention, much of the state’s coastal marsh could be gone in only 50 years.

In the West, chronic water shortages threaten the long-term viability of waterfowl habitat management. The southern Oregon−northeastern California region is the primary spring staging area for some 5 million northern pintails, mallards, American wigeon, and many other waterfowl species. Unfortunately, due to competing interests for limited water supplies, waterfowl habitats are dwindling in this area. On Lower Klamath National Wildlife Refuge—one of the crown jewels of the Pacific Flyway—only 25 to 30 percent of the available wetland habitat is now flooded annually. 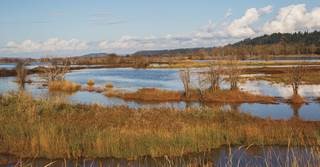 To meet these challenges, as well as emerging threats, DU is proactively working to build new partnerships and expand its base of support by leveraging its unique ability to bring together diverse constituencies with shared goals. DU’s science-based conservation work has not only increased understanding of the life cycle needs of waterfowl and other migratory birds but also the important connections between landscape conditions and land use. We know how wetlands store water, how they remove chemicals from runoff, and how they support biodiversity. We have measured the impacts of wetland drainage on downstream flooding, groundwater supplies, and the quality of drinking water. We now know that the grasslands and wetlands that support waterfowl and other wildlife also store carbon, protect communities from storms and flooding, and sustain and enhance fisheries and other sources of food.

If you scan the daily headlines you have probably seen that many of these conservation outcomes—reduced carbon emissions, enhanced biodiversity, sustainable food supplies, and improved water quantity and quality—are the same objectives listed by corporations in their sustainability pledges. These are not merely feel-good pronouncements; they are commitments rooted in their core business strategies. In 2020, the number of companies pledging to cut carbon emissions to net zero grew to over 1,500. While achieving this goal typically involves more efficient use of energy and cleaner energy sources, companies are also making “nature-based” investments that sequester greenhouse gases in plants and soils through wildlife habitat conservation. DU’s well-established carbon program on the prairies, which rewards landowners for protecting at-risk grasslands that support nesting ducks and other wildlife, is receiving growing financial support from large corporations, municipalities, and other donors seeking to reduce their carbon footprints. 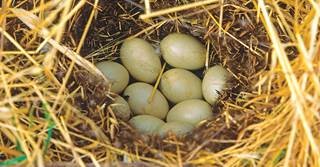 Cooperation with the agricultural community has been and will continue to be integral to DU’s conservation work going forward. Growing numbers of consumers want to know how and where their food is raised, and many actively select food products that are raised sustainably. As a result, companies up and down the supply chain are looking for partners who can help provide incentives to farmers who adopt sustainable agricultural practices.

DU biologists and agronomists work hand in hand with farmers and ranchers to implement practices that can improve their bottom line while simultaneously providing valuable habitat for wildlife. On the Great Plains, for example, DU works with farmers to plant cover crops, reduce tillage, and integrate livestock in their operations to improve soil health. These regenerative agricultural techniques increase soil productivity, reduce expensive input costs, and generate additional revenue through production of forage for livestock. By maintaining more vegetative cover on the landscape, these practices provide habitat for nesting ducks and other birds, improve watershed health, and protect wetlands embedded in croplands.

The well-documented water-quality benefits provided by wetlands also offer great opportunities for DU to form new conservation partnerships. For example, Ohio has launched a statewide initiative, H2Ohio, to ensure safe and clean water for all its citizens. As part of an effort to reduce toxic algal blooms in Lake Erie caused by phosphorus loading, DU is restoring wetlands that will trap and remove phosphorus and other nutrients from runoff and then slowly release clean water back into rivers and streams. In addition, these wetlands provide high-quality pair and brood habitat for mallards and other duck species in this regionally important landscape for breeding waterfowl. 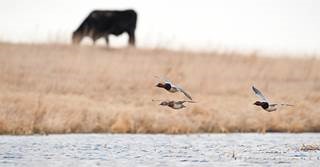 Similarly, wetland restoration is now being recognized as a cost-effective and sustainable way to reduce the impacts of hurricanes on coastal communities. A recent study found that wetlands along the north Atlantic coast reduced property damage from Hurricane Sandy by $625 million. Moreover, the Texas General Land Office is providing funding to DU to restore wetlands along the Gulf of Mexico to slow erosion and increase coastal resiliency. As other states follow suit, DU is well positioned to help them achieve their coastal protection goals while also providing valuable habitat for waterfowl and other wildlife and enhancing important recreational and commercial fisheries.

North America’s waterfowlers were ahead of their time in calling for the conservation of wildlife habitat on a landscape level. Through their vision and leadership, Ducks Unlimited and its partners have conserved 15 million acres of wetlands and associated uplands across North America. This impressive achievement has allowed waterfowl numbers to increase during the past five decades while many other groups of birds have declined. Going forward, DU will continue to draw upon its experience and history of success. We will continue to measure our progress by the acres of habitat we put on the ground, but we will also look for new opportunities and partners who will enable us to expand our impact. Wetlands conservation is relevant to everyone who cares about clean water and the health of our communities. The broad societal benefits provided by DU’s work represent a promising new frontier in our never-ending conservation mission.

Dr. Steve Adair is DU’s chief scientist, and Billy Gascoigne is an economist and environmental markets specialist with DU.